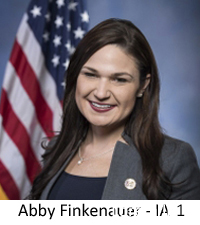 Congresswoman Abby Finkenauer grew up in northeastern Iowa and was elected to the Iowa State House of Representatives at the age of 25, where she served two terms, focusing on improving the lives of Iowa’s working families.  She ran for Congress in 2018 and she and fellow Democrat Cindy Axne became the first women from Iowa to be elected to the U.S. House of Representatives.   Finkenauer defeated the incumbent Republican Rod Blum by a margin of 5%.

Rep. Finkenauer’s areas of focus in Congress include affordable healthcare, infrastructure, and the environment.  She has introduced bipartisan legislation to permanently fund the Children’s Health Insurance Program and to expand the infrastructure for delivery of ethanol blends.  An endometriosis sufferer, she supports women’s health issues and has launched a caucus to promote education about, and support research of, this disorder.  She serves on the Transportation & Infrastructure Committee and the Small Business Committee.  She is also the Assistant Whip for the House Majority. 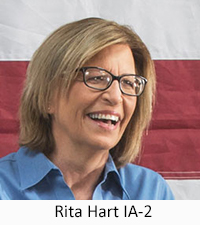 Rita Hart announced she was running as the Democratic candidate for Congress in the 2nd District, following Rep. Dave Loebsack’s decision not to run for an eighth term.  She is uncontested in the Democratic primary.  Hart grew up in Charles City, Iowa in a “divided household,” with a Republican mother and Democrat father.

Hart is a farmer, teacher, and state legislator.  With her husband, she has owned and operated a 200-acre soybean and corn farm since 1986.  After a 20-year career teaching junior high and high school, Hart was elected to the Iowa Senate in 2012.  Her bipartisan work for Iowa families, small businesses, and farms led to her reelection in 2014, despite a statewide GOP landslide.  Her popularity in the state led her to be chosen as the Democratic nominee for lieutenant governor in 2018.  Hart lists her top priorities as lowering the cost of health care and prescription drugs, supporting the agriculture economy, and improving educational opportunities for Iowans at every stage of life. 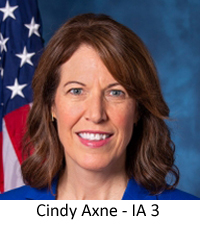 Congresswoman Cindy Axne is a fifth-generation Iowan, a small business owner, parent, and community activist.  Her community activism was sparked in 2007, when her older son started kindergarten.  Cindy learned that full-day kindergarten was not available to every child in West Des Moines public schools, with eligibility determined by a lottery.  Outraged at the inequity of the system, she spent the following academic year advocating and negotiating with principals, the school board and the superintendent. After nearly a year, her efforts paid off and full-day kindergarten was made available to all students in the district.

Cindy has demonstrated this proactive, pragmatic approach from the start of her congressional term.  She took office during the 2018-19 federal government shutdown, and was a co-sponsor of legislation to prevent future federal shutdowns from happening.   She also serves on the Committee on Financial Services, and was favorably recognized for her questioning of Wells Fargo’s CEO, which exposed that Wells Fargo had outsourced Iowa jobs overseas.  Since then, she has sponsored legislation to accelerate benefits for workers who have lost jobs to overseas locations.  Of importance to her rural constituents, following Rep. King’s removal from his committee assignments for making racist remarks, Axne became the only Iowan on the House Committee on Agriculture. 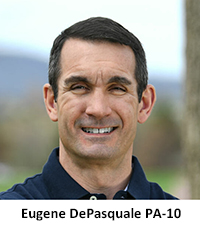 Eugene DePasquale won the Democratic primary in this district in June, and is running against the Republican incumbent Scott Perry. He is the current Auditor General of Pennsylvania and a former state senator. DePasquale’s public service career has been shaped by the challenges he faced growing up in a working-class family in Pittsburgh. His father, a Vietnam veteran, was shot during the war and struggled with addiction to pain killers prescribed by the VA hospital. When DePasquale was in high school, his youngest brother was diagnosed with muscular dystrophy, and the family was denied insurance coverage by health insurance companies who declared it a pre-existing condition. During his college years, DePasquale’s father was sent to prison for illegally selling drugs, and his younger brother passed away due to complications from his muscular dystrophy. Despite these misfortunes, DePasquale worked his way through college and law school.

DePasquale has held positions in city and state government since 2002. He served as the state representative for HD 95 (York County) from 2007 to 2013, and was elected as Pennsylvania Auditor General in the 2012 and 2016 elections. As Auditor General he demanded more government accountability and transparency, helped protect children from abuse, demanded thousands of untested rape kits be processed, exposed abuse in nursing homes, and required audits to ensure the state’s water supply was not contaminated by shale drilling. DePasquale’s 2020 campaign continues to focus on issues important to working families, including improved access to good quality healthcare, protection of Social Security and Medicare benefits, higher wages for workers (a $15 minimum wage), and job creation. 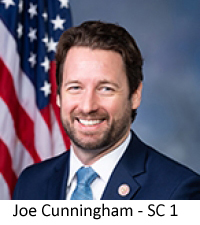 Prior to his election to Congress, Joe was an attorney and an ocean engineer. In Congress, Joe’s priorities include reinstating the ban on offshore drilling off the Atlantic coast, infrastructure investment, protecting and creating Lowcountry jobs, combating climate change and lowering the cost of health care and prescription drugs. As a former ocean engineer, Joe is committed to protecting South Carolina’s coastline and economy from offshore drilling.

Cunningham narrowly defeated Republican state representative Katie Arrington in the 2018 election, 50.7 to 49.2%. Arrington had defeated the incumbent Republican Mark Sanford in the Republican primary. Cunningham’s victory was considered a major upset, in a district that had been held by Republicans since the 1980s. Although Arrington carried four of the district’s five counties, Cunningham prevailed by winning in Charleston County by almost 17,000 votes. Joe currently serves on the House Natural Resources Committee and the House Veterans’ Affairs Committee. 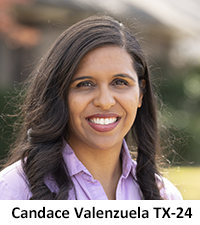 Candace Valenzuela is the Democratic candidate running to replace the retiring Kenny Marchant (R) in Texas’ 24th congressional district. She is an educator, mother, a lifelong Texan, and the daughter of U.S. Army veterans. After working in education to mentor youth and work with special needs students, she ran for and was elected to the Carrollton-Farmers Branch school board. As the daughter of an African-American father and Mexican-American mother,

Valenzuela would be the first Afro-Latina in Congress. Valenzuela understands the struggles of working-class families. After Candace’s mother left the military, she moved her children out of the family home to escape domestic violence and they were homeless for some period of time. With the assistance of government-backed housing programs and food stamps, the family was able to get back on their feet. Candace found a home in school where she excelled, and she won a full scholarship to Claremont McKenna College in Claremont, CA. She is grateful for the support and opportunities that she and her family received, and is devoted to fighting for opportunities for others. Valenzuela intends to focus on issues important to working class families and communities of color, including social justice, income inequality, affordable health care, and improved education, as well as helping to respond to the economic and public health impacts of COVID-19 in the 24th district.